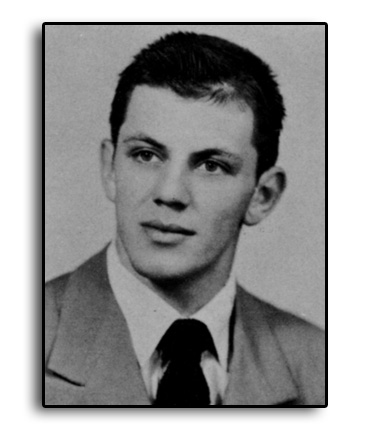 ﻿
A 1951 graduate of Bellevue High School, Sam DeBlase set the standard for all who followed him through the halls of BHS, earning a total of nine varsity letters in three different sports in his three years of varsity competition.

Described in one Bellevue Gazette article as “the medium-size senior with the giant-sized heart,” DeBlase was a force to be reckoned with on the football field, the basketball court, and the track.

Because of his special athletic abilities, DeBlase was named the first-ever recipient of The Bellevue Gazette Award in 1951, given to the top male athlete. The award has been given continuously since 1951 for males, and since 1976 for females.

On the football field, DeBlase was captain and was named Most Valuable Back during his senior season in 1950.

On the basketball court, he earned second team All-Sandusky Tournament honors in 1949, was named captain of the team during the 1950-51 season, was MVP and leading scorer that same season, earned honorable mention All-Northern Ohio League, and was first team All-Toledo Blade in 1951.

Sam had actually earned a starting spot for head basketball coach Joe Ayers during his sophomore season, prompting Ayers to comment, “Sam was the glue that held the team together – and he is only a sophomore!”

Sam also earned three varsity letters in track and field. His versatility allowed him to participate in many events, mainly the high jump.

Now retired, Sam and his wife, Beverly, reside in Bellevue.﻿
Return to the 2009 Inductees