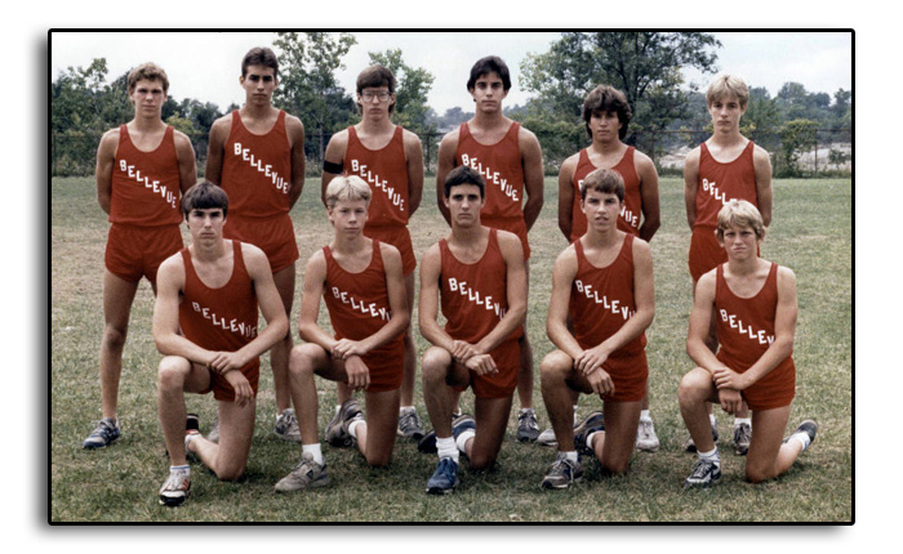 Row 1:  Ken Hundley, Mike Klinski, Mark Konst, Brian Hicks, John Strayer
Row 2:  Matt Turner, Chuck Linek, Stu Behm, Tom Sarty, Scott Rhoades, Mike Black
﻿
Entering the 1985 season, the Redmen had lost some key components to their state championship season.  They did however have five returning lettermen and some quality runners to replace those that left via graduation.  They would not sneak up on anyone though and would earn all the honors to come their way.  The 1985 team was up to the challenges.  They knew what the ingredients were.  Hard Work, pushing each other and listening to their mentor, Coach Miller.

Unlike the previous season where 1st places were hard to come by during the season, the 1985 team produced nothing but 1st place finishes.  They won the N.O.L. title unlike a year ago.  This was a great feat since the N.O.L. had some quality teams and runners.  Sophomore but cross country newcomer Matt Turner led the team at the league meet with a 3rd place finish.  He was followed by Stu Behm in 5th place and Tom Sarty in 6th place to lead the Redmen.  The Redmen then went on to claim the both the District & Regional Championships in back to back weeks.  Quite an accomplishment!  Winning three straight titles three weekends in a row!

It was off to Columbus once again and this time as the reigning state champions and current regional champions.  Success did not go to this groups head though, as the Redmen ran the rest of the Class AA field right off the course.  In less than ideal weather conditions, the Redmen upheld their belief in themselves.  In a rain soaked course at Scioto Downs Raceway, they defeated second place Napoleon by 19 points to capture the Class AA State Championship once again.  Senior Tom Sarty led the red & white with an 8th place finish, followed by sophomore Matt Turner 9th place, and senior Stu Behm 10th place.  Sophomore Brian Hicks was close behind in 13th place followed by senior Scott Rhoades 46th, senior Chuck Linek 55th, and sophomore Ken Hundley 88th.