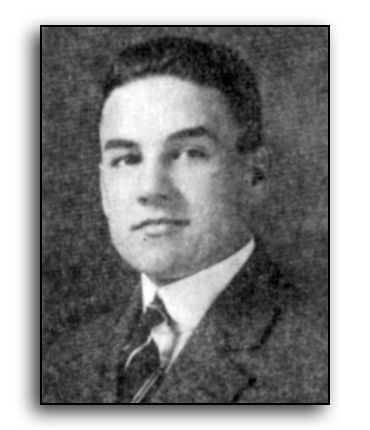 “He was the finest athlete of our day.”

The words of 1914 Bellevue Redmen football coach P.M. Toroski when describing Dr. William J. “Bill” Bauer, Bellevue High School Class of 1915. Bauer, who died on Feb. 13, 1935, was a star football, basketball and track athlete during his time at Bellevue.

Bauer captained the 1914 football team during his senior campaign, leading the squad to an 8-1 overall mark as a running back and kicker.  The Redmen were Little Big Six champs that season, in a league consisting of Bellevue, Norwalk, Sandusky, Fremont, Lorain, and Elyria.

The sport of basketball was where Bauer excelled for the red and white.  During his sophomore, junior and senior seasons, Bill led his team to 12-1, 13-1, and 14-1 overall records.  His teams won 31 consecutive regular season games over that span.

Bauer led the Redmen in scoring his junior year (183 points) and senior year (200 points).  He scored 38 points vs. Monroeville in the 1914-15 season opener, and that single-game scoring mark stood until 1972.  The Redmen shared the Northern Ohio High School League title with Lorain in 1913 and won the title outright in both ’14 and ’15.

Also during those three seasons, Bellevue was picked by a committee to play in the Delaware State Basketball Tournament.  In 1915, the Redmen won games against Steubenville, Mansfield, Lorain and Elyria before dropping at 29-25 decision to Mount Vernon.  The team won the consolation game 42-8 over Ashville.  That year, Bauer became the first-ever Bellevue athlete to receive All-Ohio honors, and was the only unanimous player chosen by the sportswriters.

Bauer attended Kenyon College and participated in all three sports, holding the school high jump record and being named All-Ohio in basketball.

He enlisted in the U.S. Navy during World War I for the next two years, before enrolling at the University of Iowa to study medicine.  He then became a resident physician at Methodist Hospital in Indianapolis in 1934 just prior to his death
Return to the 2015 Inductees