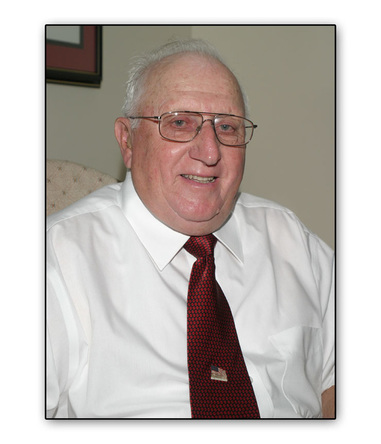 The honoree for the second annual “Big Red Spirit Award” wears the colors of his hometown and those of his country on his sleeve.
Don E. Behm, a native of Bloomville, will forever be known as “The Voice of Redmen Football” and as “that guy who always sings the National Anthem” at countless sporting and civic events.

Drafted by the U.S. Army in 1944, Don served in the 3rd Army, 11th Armored Division under General George S. Patton until his discharge in 1946. He then graduated from Heidelberg College in 1951. He worked for two years for the Northern Ohio Breeders Association and 14 years as a salesman for the National Biscuit Company before finding his true calling in the field of education.

Don began his teaching career at Thompson Local School in 1966, also taking the duties of basketball, cross country and track coach until the school consolidated with Bellevue City Schools in 1968. Don then joined the Bellevue Junior High School staff, teaching science, health and physical education, coached track and field, and taught a drug, alcohol and tobacco awareness program to fifth and sixth graders until his retirement in 1991.

A life member of the Bellevue American Legion Post #46, Don received the Americanism Award in 1983 and a commendation from the 5th District, State of Ohio in 1990. Don has on several occasions been the featured speaker at Memorial Day services in Bellevue, Lyme Township, Bloomville and Attica, and has been master of ceremonies for Bellevue’s Memorial Day service for many years. Don is also a life member of Bellevue Veteran’s of War Post #1238 and is past chairman of the Voice of Democracy Program.

Don has given countless speeches to elementary school students on patriotism and the proper etiquette for displaying the American flag,

He has worked Heidelberg football and basketball games since 1951 in many different capacities, and received that college’s Alumni Citation in 1995. He received the Friends of Bellevue Schools award in 1999 and was also inducted into the Heidelberg Hall of Fame that same year.

Don has been the official timer at two Ohio High School Athletic Association state basketball tournaments, and belongs to the Bellevue Track Officials Association and officiates track and field and cross-country. He received the National Federation Distinguished Service Award in girls cross-country in 1991, has announced and timed Bellevue basketball games, is the Voice of the Redmen for football, and announces the halftime band show and for music concerts.

And, he still continues to sing that National Anthem whenever asked – a promise he made to God during combat duty with the U.S. Army.

Says Don, “Being around young people has kept me young and I have enjoyed every minute.”