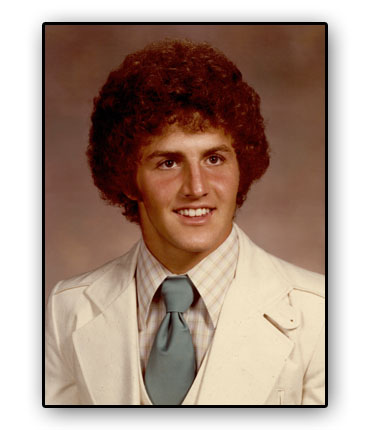 ﻿
He was one of the hardest working athletes ever to wear the red and white.

Gary “Duke” Haynes was one of the most naturally-talented and gifted athletes to letter at Bellevue High School, racking up three letters each in football and track and field, and two letters in basketball during a time when BHS was just a three-year high school. He was a 1979 graduate of BHS.

His athletic achievements earned Duke several all-league and all-state honors. In addition, he was twice named Gazette Award Winner as the most valuable male athlete, and he earned a full athletic scholarship to the University of Michigan where he played football under legendary coach Glen “Bo” Schembechler.

As a sophomore at BHS, Haynes lettered in football, making honorable mention All-Northern Ohio League (NOL). He lettered in basketball during the winter sports season, then began a stellar track and field career by lettering and qualifying to the state meet in the 100-yard dash.

As a junior, Duke once again lettered in football making first team All-NOL and first team District 6. He played and lettered in basketball and in the spring, once again turned in a stellar track and field performance, qualifying again to the state meet.

As a senior, Duke lettered in football once again and earned honorable mention, All-Ohio for his efforts and was team MVP. He rushed for 2,459 yards and 30 touchdowns during his career.

A knee injury sidelined Duke during the winter sports season in 1978-79, but he was back with a vengeance on the track where he lettered once again and qualified to the state meet in both the 100-yard dash and as part of the 4 x 100 relay team along with Tony DeBlase, Tom Taggart, and George Eybs.

Haynes was so dominant on the track that he was named three-time Most Valuable Player. He participated at state all three years, finishing third in the 100-yard dash on two separate occasions; took 10 individual first places at NOL meets during those three years; and for three years, never lost an individual track event prior to losing his first races at the state meet.

Duke then played football at University of Michigan and was twice named the Best Conditioned Athlete for the Maize and Blue.

Off the field, Duke was a member of Student Council and the National Honor Society.

Duke, his wife, Shelly, and their family currently reside in Spring Lake, Michigan.﻿
Return to the 2006 Inductees