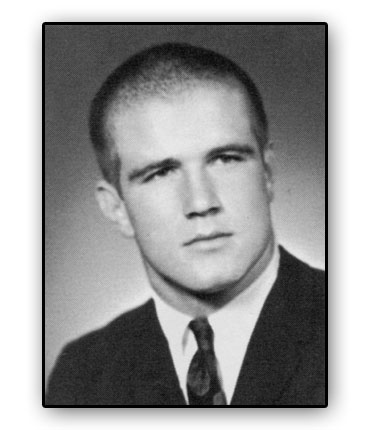 ﻿
He was the prototypical “blue collar” athlete in both football and wrestling for the red and white, graduating in 1971 as a true state champion.

Don Didion stood tallest among all 188-pound wrestlers in 1971, bringing home the first-ever individual wrestling state championship for the Redmen and late head coach Bob Bailey, who is also a member of the Redmen Hall of Fame.

Don earned three varsity letters in football and was named All-Northern Ohio League as a nose guard, but it was the sport of wrestling where the local boy really excelled.

Wrestling and lettering just two years at BSH, Don was 39-9 overall, including 21-2 during his championship run in 1971. As a junior, he was first at sectionals and fourth at districts. During his senior season of wrestling, Don was first at the Northern Ohio League meet, first at sectionals and district, and state champion. This was during a time when there were only two divisions and 12 weight classes for wrestling, and Bellevue wrestled in the large-school division.

During his championship run, Don tallied two wins in the opening rounds on Friday during the 34th annual State Wrestling Meet, held before 11,000 fans in St. John’s Arena on the campus of The Ohio State University.

On Saturday, Didion built an 8-2 lead on Larry Wiggins of Columbus Marion Franklin, then held on for a wild 13-10 win, propelling him into the state championship bout vs. Regel Haynes from Toledo Scott.

The two wrestlers had met just the week before at districts with Didion getting the upper hand. Didion gained an early takedown and took a 2-0 lead into the second period. He then added an escape, another takedown, and was awarded a penalty point when Haynes was guilty of stalling. The final tally was 8-3 and Bellevue had its first-ever state wrestling champion.

So big was the state title news around town that a caravan of 40 vehicles led Don back into town on Sunday to help celebrate the achievement. Wilson Loundenslagel, acting as master of ceremonies, introduced several speakers for their remarks, including head coach Bailey; Rich Woolsey, vice president of the Redmen Boosters; Chamber of Commerce President Floyd Donahue; Father William Janney; Pastor Kenneth Nosworthy; and Bellevue Mayor Bill Artino who offered congratulations on behalf of the city and presented Didion with the symbolic Key to the City of Bellevue.

At the Redmen wrestling banquet later that season, Didion was honored as captain of the team and also picked up the MVP award for the red and white. He also received a certificate for most initial takedowns and was presented a watch on behalf of the Redmen Boosters.

Don is the owner/founder of Didion’s Mechanical. He and his family still reside in Bellevue.﻿
Return to the 2006 Inductees