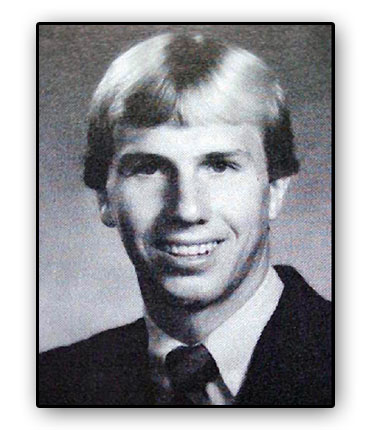 Few high school athletic careers have rivaled that of Bellevue’s Brian Schubert, a standout in golf, basketball, and baseball for the Bellevue Redmen.

Schubert earned a total of 11 varsity letters for the Redmen, including four each in golf and baseball, and three in basketball.

One of his greatest achievements came in 1985 when he pitched on consecutive days in the state baseball tournament, leading the Redmen to the Class AA state title with a 6-4 win over Steubenville Central Catholic on Friday, followed by a 3-2 win over Wellston on Saturday. In fact, Schubert started and won all eight of the tournament games for head coach Ed Nasonti during the state title run, an achievement not likely to ever be duplicated.

In addition to winning the four letters in baseball, Schubert was first team All Northern Ohio League in 1985 and 1986, and honorable mention in 1983. He was selected the team’s most valuable player in both 1985 and 1986, and was a member of the All-Ohio baseball team, and started and took the win in one of the four games played in the series.

He was a member of three Northern Ohio League championship golf teams, and a member of two state qualifying teams. He was first team All Northwest District in both 1984 and 1985, and placed at the state golf meet during three seasons from 1983-85.

In basketball, Schubert earned three letters and was voted first team All Northern Ohio League in both 1985 and 1986 after taking honorable mention honors in 1984. He led the Redmen in scoring in 1985 (18.6 ppg) and 1986 (22.8 ppg) and was also the NOL’s leading scorer in 1986. He was voted team MVP that same year, was first team All Northwest District, and is third on the all-time career scoring list with 1,190 points.

After high school, Schubert signed to play baseball with Kent State University where he became a four-year letter winner. He went 5-2 as a starting pitcher in both his freshmen and sophomore years, was 8-3 as a junior, and 9-4 as a senior. He was second team All Mid-American Conference in 1989 and first team in 1990. He was also voted MAC Pitcher of the Year in 1990, and his 2.55 earned run average was the lowest in the league.

His 22-9 career record at KSU ranks him fourth on the all-time list. In his first-ever start for Kent, Schubert tossed a no-hitter in a 6-0 win, the third pitcher in NCAA history ever to toss a no-hitter in his first collegiate start.

He was drafted by the Detroit Tigers in the 32nd round of the 1990 Major League Baseball Draft. He reported to the Niagara Falls Rapids of the New York-Pennsylvania Class A League, where he was 3-1 overall as a starter before shoulder surgery ended his brief major league career.

Schubert is currently the assistant principal at his alma mater, Bellevue Senior High School.
Return to the 2004 Inductees