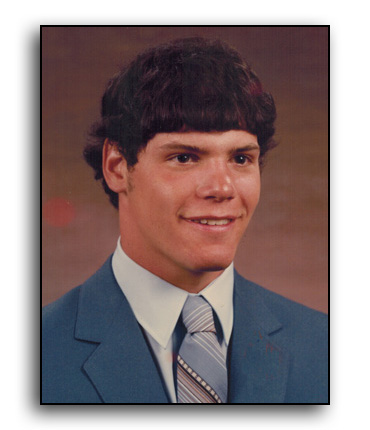 Ron Hay was the prototypical blue collar, hard-working athlete that few Redmen fans had seen before 1980, or have seen since.  A 1982 graduate of Bellevue High School, Hay earned three letters in football and two in basketball.

He started 14 games at forward his junior season in basketball, helping to lead the team to an 18-3 overall mark.  The following season Ron was captain and averaged 104 points per game and scored the winning basket as time expired on Senior Night to beat Bucyrus 60-58.  He earned Sectional Tournament MVP honors and was All-Northern Ohio League Honorable Mention.

On the football field, Ron started six games at linebacker as a sophomore, making 52 tackles with a QB sack and fumble recovery.  As a junior, he was All-NOL Honorable Mention at linebacker and Honorable Mention All-District.  He led the team with 105 tackles, two fumble recoveries and an interception and had a career-high 16 tackles against Norwalk.  For his efforts, he received the Ted Sberna Award as the top defensive player.

As a senior, Ron was First Team All-NOL and All-District and Second Team Associated Press All-Ohio and Honorable Mention All-Ohio, United Press International. He captained the first-ever Redmen playoff team that season, coming up with 14 tackles in the 7-6 playoff loss to Elyria Catholic.  He helped lead the Redmen to the NOL title and earned Best Lineman award from his coaches. He led the squad with 87 tackles, one fumble recovery and one interception.  The Redmen held their opponents scoreless in the first five games that season, giving up only 38 points all season and just 439 yards rushing. He finished his career with 244 tackles.

Ron was named the Bellevue Gazette Award winner in 1982 as the top male athlete at BHS.

Ron was then a four-year letter winner in football at Ashland University, earning Honorable Mention Heartland Conference, True Grit, and Conference Player of the Week awards along the way.

Today, Ron and his wife Cathy reside in West Holmes, Ohio.  They have four boys.  Grant (20 yrs.), Gram (18 yrs.), Grady (15 yrs.), and Grayson (13 yrs.)  Ron is currently in his 30th year of education and is serving as the West Holmes Middle School Assistant Principal.
Return to the 2015 Inductees