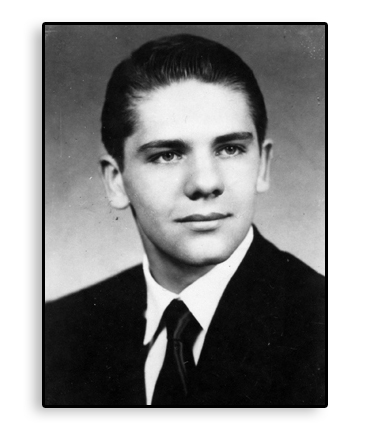 ﻿
Edwin Roberts was a three-sport athlete for the Bellevue Redmen, earning a total of eight letters in the sports of football, basketball and track and field. Following high school graduation in 1954, Edwin went on to very successful college and Armed Forces careers.

While at Bellevue High School, Edwin earned three letters in football, gaining Second Team All Northern Ohio League honors as a defensive end his junior year of 1952. That same season he was also named Second Team Toledo Blade All Star Junior Team. As a senior in 1953, Edwin went one better in being named to the First Team in both the Northern Ohio League and the Toledo Blade All Star Senior Team. Even though Edwin was primarily used as a defensive tackle and offensive end, he did have the opportunity to play offensive back in a game against Bucyrus, scoring two touchdowns in a 21-19 victory.

​In basketball, Edwin played on the junior varsity team as a sophomore and was a member of the varsity team as a junior. He earned a varsity letter during the 1953-54 season, coming off the bench for the team that finished 16-2 overall and won the Northern Ohio League title.

In the sport of track and field, Edwin earned four letters, helping Bellevue to win its first two Northern Ohio League championships in 1953 and 1954. He competed in the 440-yard run, low hurdles, high jump, 880-yard relay team, and the mile relay team. He ran on the mile relay team that broke the school record in 1954 at the Upper Sandusky Relays. The mile relay team qualified for the state meet in both 1953 and 1954, finishing fifth overall in ’54 after also winning the Mansfield Relay title in the same event.

Following high school, Edwin took his talents to Michigan State University on a football scholarship for Head Coach Duffy Daugherty and Ends Coach Bob DeVaney. He earned his numerals as a freshman in 1954 (freshmen at the time could not earn a varsity letter). He competed his sophomore year with the team that won the Big Ten title and defeated UCLA in the Rose Bowl by a 17-14 score. That victory assured the Spartans of the National Championship. For years Edwin and several members of the National Championship team were made to wait for their championship ring. Finally, at a ceremony on Dec. 1, 2007, Edwin and his teammates received their National Championship rings during festivities at an MSU basketball game.

Edwin was called to duty in 1957, leaving MSU for the U.S. Marines. While attending Electronics School he found the time to play football with the Navy Team at the Memphis Naval Air Station, playing both offensive and defensive end, linebacker, and punter. In 1959 during Navy Flight School, Edwin played outside linebacker and offensive end on the 8-2 National Service Team champions.

Edwin and his wife, Janet, reside in Lake Placid, FL. They are parents of three children and three grandchildren.
Return to the 2011 Inductees