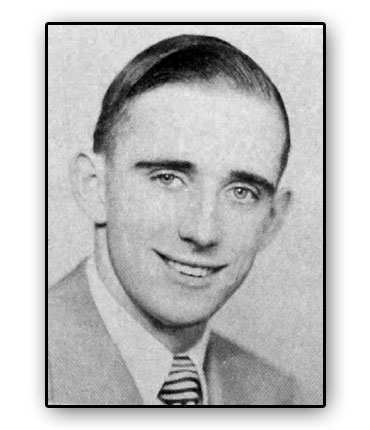 Milt Bruckner set a standard of achievement in all sports he participated in, and he has the distinction of being Bellevue’s first-ever state champion in any sport.

A Bellevue Gazette article on July 7, 1949, summed it up this way about Bruckner:  “Milt, who is undoubtedly the greatest athlete to be graduated from Bellevue High School, was All-Ohio in track placing first in the half-mile (one-tenth of a second off the state record) at 1:59.6. He was Bellevue’s first individual state champion in track. He was first team All-Ohio in football as an offensive end and All-Ohio third team in basketball.”

Bruckner was awarded 14 letters during his high school career, including three in football, three in basketball and one minor letter in basketball, four in track, and one in baseball in 1947. He also won two all-sports letters which were major letters awarded for two years participation in three sports. Bruckner added three trophies after being named MVP in football, basketball and track.

After being crowned state champion in Columbus, Bruckner joined three other runners and formed a mile relay team and entered the Dayton A.C. Ohio A.A.U. Conference following the state meet in 1949. The team won the event and earned a trophy. The team flipped pennies and Bruckner won ownership of the trophy and the penny since he was the only one coming up with heads on the first flip.

If that wasn’t enough for any athlete to cram into four years of high school, Bruckner added 23 medals from his freshman year to his senior year. This included participation in Bellevue Inter-Class, DeVillbis Relays, Northern Ohio League meets, Miami University Relays, Ashland Relays, and the Mansfield Relays.

The 23 medals won by Bruckner included four gold footballs, gold basketballs, gold baseballs, and track emblems. The baseballs were for his two years of play with the Junior Legion Championship team in 1946 and 1947.

His four basketball medals were for the Redmen being crowned NOL champions in 1947 and 1948, and for being runners-up in the Sandusky District Tournaments in 1948 and 1949.

Kenny Sampson, BHS track coach, had high praise for Bruckner, saying, “Without a doubt, Milt is the greatest competitive athlete to come under my guidance.”
Return to the 2004 Inductees