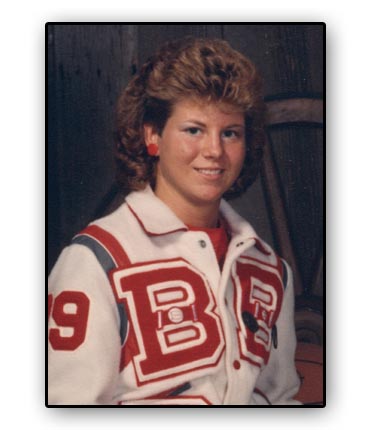 ﻿
One of the most versatile female athletes to suit up for the red and white was Bellevue’s own Alisa Raifsnider. Over the course of her four-year high school career, Raifsnider earned 10 varsity letters in three different sports – softball, basketball, and volleyball.

A 1989 graduate of Bellevue Senior High School, Raifsnider earned three letters each in volleyball and basketball, and four in the sport at which she truly excelled – softball.

In volleyball, Alisa was captain of the 1998 team and also earned All-Northern Ohio League honors the same season. The squad won both sectional and district titles before settling for a regional runner-up finish.

During her four-year high school softball career, Alisa earned dozens of awards and honors. She was captain of the 1989 team, and was named All-NOL in 1987, 1988, and 1989. She was All-District from 1987-89 and was named All-Ohio in 1989. She helped lead her team to the district title that same year. She started every game at shortstop over four seasons and broke the 17-year-old school RBI record with 42.

She was named the Bellevue Gazette Award recipient in both 1988 and 1989 as the Most Valuable Female Athlete, was an NOL-Scholar Athlete from 1987-89, and was named to the National Honor Society in 1989.

With her accomplishments on the softball field, Raifsnider earned a softball scholarship to The Ohio State University, where she started at shortstop for three years. She was named All-Big Ten in 1992, Best Offensive Player that same season, and graduated from OSU in 1993.

Alisa resides in Pataskala, Ohio.﻿
Return to the 2005 Inductees