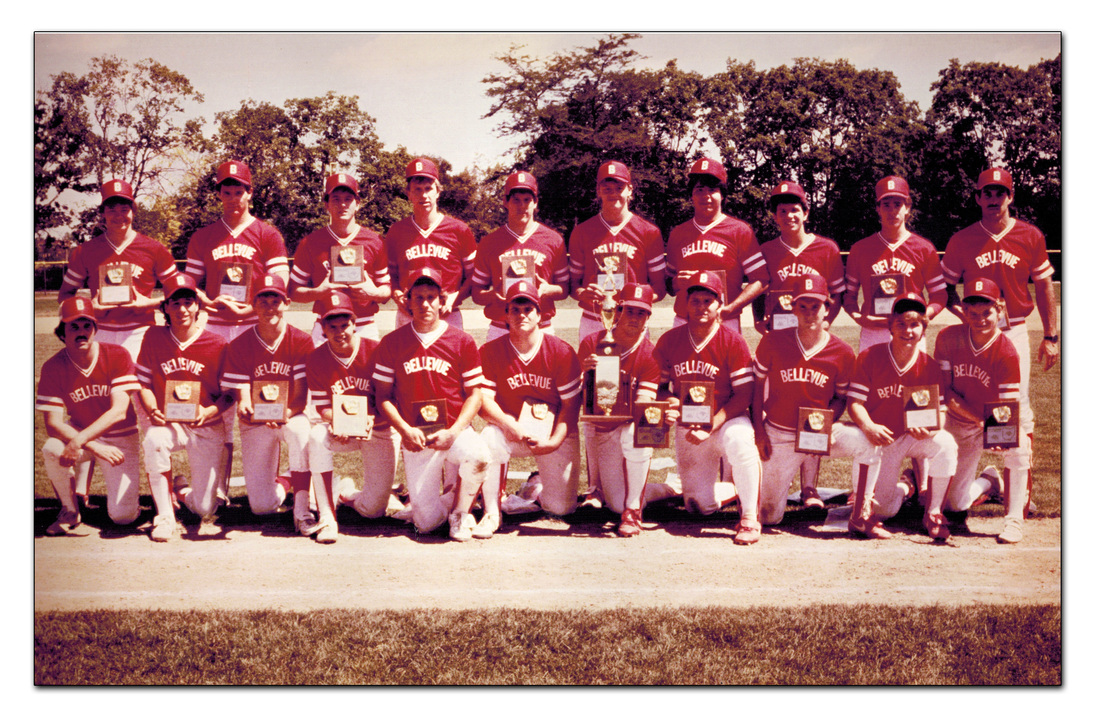 Under the direction of Head Coach Ed Nasonti, in just his 3rd year at the helm, the State AA championship trophy was brought home through the streets of Bellevue.  The team was given a hero’s welcome Saturday afternoon, June 1, 1985 back into the city.  Police cars, fire trucks, and parents led the team bus back into the city.  Parents, family, friends, and community members lined the streets as they made their way through downtown Bellevue.  A buzz was in the air as car horns were honking and people were cheering the team.  Hundreds of family members and fans followed the team bus back to Bellevue High School where the team showed of the state hardware.

It was not an easy ride or season by any means.  The team enjoyed a successful regular season going 14-8, but were only .500 in the NOL at 7-7.  There were ups and downs like most seasons, but the team caught fire in the tournament.  They caught a belief and confidence that could not be matched in the tournament trail.
The team went into the Sectional Tournament unseeded.  They left with Sectional wins over Willard 7-4 and Perkins 15-1 and the Sectional Title.  In the Sectional Final, Chris Missler belted a 3-run home run while Randy Drennen, Brian Schubert and Jeff Doster each collected 2 RBI’s.  Schubert struck out 14 on the mound for the Redmen.

In the District Semi-final they came from behind with 3 runs in the bottom of the 7th to defeat a very good Colonial Crawford team 7-6.  Steve Falter doubled home the tying run and Mark Hansard smashed the game winning triple to center field scoring Falter for the comeback victory.  The Redmen then went on to route Huron in the District Final game 16-3 and punched their ticket to the Sweet 16 for the 2nd year in a row.  Jeff Doster capped an 8-run 4th inning with a 3-run homer and Mark Hansard highlighted a 3-run 3rd inning with triple to right center.  Brian Schubert and Mark Ziegler combined for the pitching efforts and victory.

At the Regional Tournament held at Lima Bath H.S., the Redmen jumped on Milbury Lake early by batting around in the first inning and putting up 4 runs.  Steve Falter’s run scoring single started the scoring.  Mark Hansard’s triple to right center scored 2 more and Mike Strayer drove in the 4th run with a single to close out the first inning.  The Redmen hung on for a 5-2 victory.  Brian Schubert fired a 2-hitter, struck out 6 and retired 15 in a row at one point.  The win earned them an Elite 8 match-up with Coldwater, the defending 2-time state champions.  What a match up, what a game!  The Redmen prevailed with a 4-3 win over Coldwater (25-3) sending them to the State Tournament Final 4.  Chris Missler hit a solo home run to put the Redmen up 1-0 in the 3rd inning.  Coldwater came back with 2 runs in the 4th to take a 2 run lead.  Coldwater’s lead did not last long as Brian Schubert delivered a 3-run home run in the bottom of the 4th to give the Redmen a 4-2 lead.  It was a lead that the Redmen did not give up winning the game 4-3.   At that point, it was the biggest win in Redmen Baseball history.

The State Tournament was held at the Ohio State University Baseball Complex.  School was canceled on Friday as the Redmen (20-8) faced Steubenville Central Catholic (23-5) at 9:30 a.m. on this day.  Students and fans flocked to Columbus to see the action.  They were not disappointed as the Redmen again got down early in the game 2-0, but scored single runs in the 2nd, 3rd and 4th innings to take a 3-2 lead.  They tacked on 2 more in the 6th for a 6-2 lead and hung on for a 6-4 win.  The Redmen were in the State Final game!  Lead-off hitter Randy Drennen was a catalyst all game getting on base 3 times and Mark Lehmkuhl, Tim Swartz, Chris Missler, and Brian Schubert provided the other hits.

The Redmen would face Wellston in the State AA Final.   Wellston entered the game 26-6 and the Redmen were now 21-8.  Throughout the tournament the Redmen had to battle from behind.  It would be no different in the state final as Wellston had a 2- 0 lead going into the bottom of the 6th inning.  The Redmen had made 5 errors in the game and also had a run taken away as Steve Falter missed home plate and was called out in the 4th inning after scoring.  Falter would get his revenge though!  In the bottom of the 6th inning Tim Swartz got on base via a Wellston error.  Chris Miano entered the game as a pinch runner for Swartz.  Chris Missler followed with a single, and then Steve Falter plated the first Redmen run with a double to right center field scoring Miano.  Now down 2-1 with runners on 2nd & 3rd, Mike Strayer delivered the shot heard back in Bellevue.  He lined a pitch over the left fielder and off the wall scoring Missler and yes, Steve Falter, for what stood up as the winning run.  The 3-2 Bellevue lead going to the top of the 7th inning held up as Schubert stranded a lead-off walk at third base striking out the final batter of the game on a called 3rd strike.  State Title to the Redmen!  The team piled on each other between the mound and plate area and the celebration began.   What a game, season, and year for Redmen fans!

The 1985 Baseball Team consisted of:

Return to the 2015 Inductees