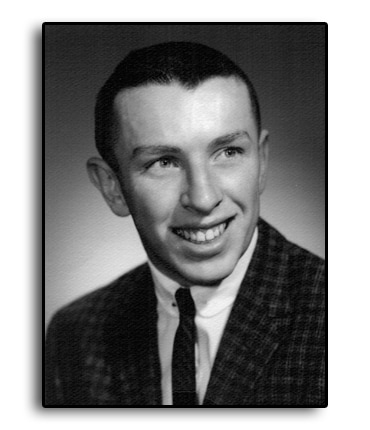 A 1961 graduate of Bellevue High School, Glen Miller earned nine varsity letters over his stellar career, three each in the sports of football, basketball, and track and field. Along with his athletic success, off the field, Glen was a member of the National Honor Society.

On the football field, Glen was a two-way starter for three years as a halfback/defensive back. He was named first team All-Northern Ohio League defensive back as a junior in 1959 and led the NOL with interceptions (7). During his senior campaign, Miller quarterbacked the team to a 7-3 overall record with all three loses by a total of 10 points. He was first team All-NOL quarterback that season, Most Valuable Backfield Player, team MVP and Captain.  Glen joined his father Willard (1930’s) and his brother Gary (1960) as Redmen football captains.

On the track, Miller ran sprints and relays and earned three varsity letters.

On the basketball floor, he was a three-year starter with his teams going 11-9, 12-7 and 7-12 overall those three seasons. He scored over 100 points as a junior and 137 his senior season. He was first team All-NOL his senior season, and was team MVP and Captain.

For his athletic prowess, Miller was named the Gazette Award Winner as the most valuable male athlete during his senior year.

After high school, Glen continued his football career at Ohio Northern where he played defensive back, earning three letters and receiving his degree in secondary education. He also coached football at Dayton Stebbin High School after college and welcomed his brother and Bellevue Athletic Hall of Fame member Gary “Red” Miller (Enshrinement Class of 2004) to this coaching staff his second year at the helm.

Glen moved into sales management with Xerox for 10 years before moving to a company out of Paris, France in their management and IT consulting.  He became the CEO of Cap Emini Sogeti for their North American operations.
​
Glen has been married to his wife Linda for 52 years and they have two children, Marc and Melissa.  They also have three grandchildren.