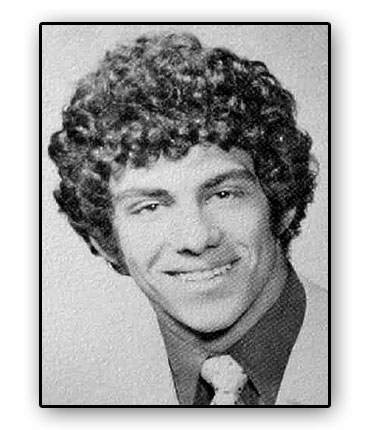 One of the most successful male athletes to ever wear the red and white of Bellevue, Nasonti carried that athletic success into a stellar coaching career, which continues to this day.

As a member of three different AAA (big school) varsity sports at BHS, Nasonti earned a total of nine letters in the “big three” sports of football, basketball, and baseball.

As a third baseman for the Redmen, Nasonti was a three year letter winner and starter, was honorable mention All Northern Ohio League in 1976, was first team All NOL in 1977, and was captain and team MVP in 1977.

But it was in football where Nasonti really excelled, lettering three times (1974-76) as tailback/quarterback for the Redmen. He was named first team All Northern Ohio League quarterback in both 1975 and 1976, guiding the team to the NOL title in 1975. He was named captain and MVP in 1976, was All Northwest District, and was named honorable mention All Ohio.

Nasonti then attended the University of Toledo on a full athletic scholarship from 1977-81, where he lettered as a defensive back for the Rockets.

For all his high school success, Nasonti was named as the Gazette Award winner for 1977, an honor given to the most valuable male performer each year on a vote of athletes and coaches.

Nasonti continued his ties with Bellevue Senior High School, returning as a teacher/coach upon completing his college degree.

As a varsity baseball coach for the Redmen, Nasonti guided the team to the 1985 Class AA state championship. In 10 seasons as head coach, Nasonti compiled a record of 145-82 from 1983-92. Included in the run was one Northern Ohio League title, six sectional championships, two district titles, one regional title, and the aforementioned state championship.

In 1991 , Nasonti seized the opportunity to guide the Bellevue Redmen football team as head coach, a position he currently holds for the red and white. His current coaching record is second to none in Redmen history.  At the end of the 2004 campaign Coach Nasonti stood with 126 wins and 30 losses, an 80.7 percent success rate. In regular season play, Nasonti’s stood at 118-22, an 84.2 percent success rate, and in conference games only, Nasonti has guided the Redmen to a record of 83-14, an 85.6 percent success rate.

Since taking over the helm of the football program, Nasonti has won 11 Northern Ohio League titles, including seven titles in the 1990s. The team has made eight playoff appearances under Nasonti’s guidance, and since 1991, the Redmen have won two regional football titles and have appeared in Football’s Final Four on two different occasions.

Nasonti is currently a teacher/coach at Bellevue Senior High School.
Return to the 2004 Inductees