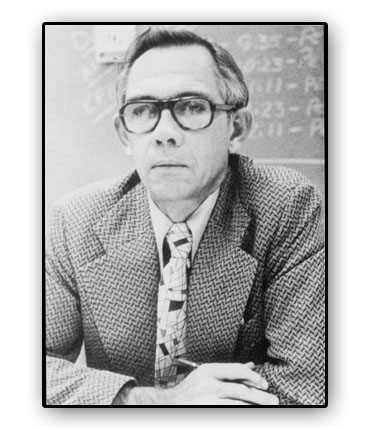 Lowell Shaffer’s name is synonymous with Bellevue Redmen football. In fact, part of the Bellevue Athletic Field Stadium is named in honor of the local coaching legend, who compiled an overall record of 144-61-11 with the red and white.

A native of Indiana, Shaffer graduated from Forest High School in Hardin County, Ohio, and furthered his education at Ohio Northern University on a basketball scholarship. He did not play football until his final two years at Ohio Northern.

Shaffer then moved on to the head coaching job at Grove City near Columbus where he spent the next four seasons coaching football, basketball, baseball, and track. He then returned to his alma mater in 1950, spending two years as an assistant football coach and head track coach at Forest High School.

Shaffer came to Bellevue in 1952 where he was to stay until his retirement 23 seasons later. Only five times during those 23 years had Bellevue suffered losing seasons. He also served as head track coach, junior high basketball coach, and athletic director while at Bellevue High School.

He also entered the classroom, where he taught biology before turning his attentions to the industrial arts field, concentrating primarily in the drafting field.

Shaffer was quoted in a 1974 Bellevue Gazette article as saying that his greatest thrill as coach “has been the development he has seen in the athletes. It is really something to see a kid come from literally nothing and mature into a fine athlete.”

Shaffer always stressed defense while coaching the Redmen, telling his troops that “If the other team can’t score on you, then they can’t beat you.”

Upon his retirement from the game he loved to coach, Shaffer said, “I have mixed emotions about leaving the game that has been so much a part of my life and it sure will be missed. This season (1974) has been one of the most gratifying in my career as we started with little experience and knew it was going to be an uphill struggle, but this year’s team has made me extremely happy as the kids have given 100 percent all the time and a coach can’t ask for more than that.”
Return to the 2004 Inductees