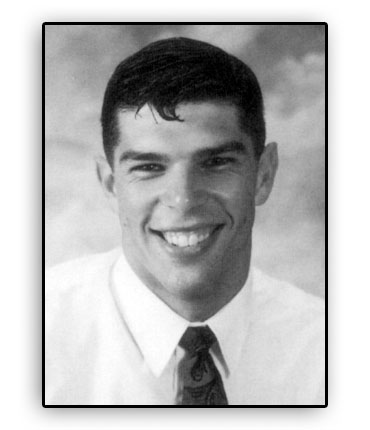 ﻿
One of the best conditioned and hardest working football players ever to wear the Redmen colors was 1997 graduate Chad Kuhns. Chad re-wrote the Redmen record book in football, went on to a successful college football career, and briefly flirted with an NFL career before retiring from the football scene.

Chad helped the Redmen achieve a regional football championship in 1996, the first regional title in school history. While playing for the Redmen, Chad helped his team win the Northern Ohio League title in 1993, 1994, and 1996. Other honors include team captain in 1996, team conditioning champion in 1995, second team All-NOL in 1995, and sophomore conditioning champion in 1994. He was also honorable mention All-NOL as a defensive back in 1995.

After high school, Chad was selected to play in the Ohio North-South football contest before heading off to Wisconsin after being recruited by Barry Alvarez to play football for the Badgers.

Chad and his wife, Erica, and their daughter reside in Madison, Wisconsin.﻿
Return to the 2007 Inductees