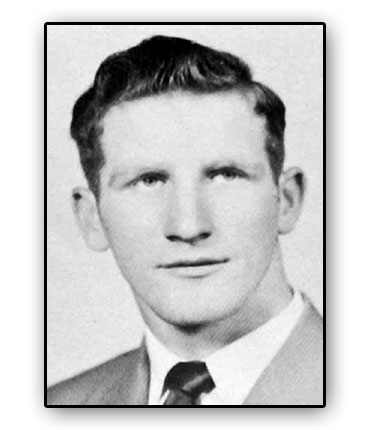 All-Northern Ohio League First Team in football in both 1950 and 1951, Siesel was also selected honorary captain of the Redmen and was All-Ohio honorable mention lineman in 1951.

Following his very successful high school career, Siesel became a walk-on at Miami of Ohio University in 1952, eventually earning a football scholarship. He captained the freshmen team for the Redskins that same year.

He earned his first varsity letter with Miami the following season, helping to guide the team to an overall mark of 7-1-1.

In Siesel’s junior season of 1954, he was named Second Team All-Mid American Conference, guiding the MAC champion Redskins to an 8-1 record.

In 1956, Siesel was drafted by the Los Angeles Rams of the National Football League. However, Uncle Sam’s draft took precedence and Siesel served his country in the U.S. Army, helping to lead the Fort Knox, Ky. Football team to an undefeated season.

In 1959, after Army life, Siesel had a short stint with the Montreal Alouettes of the Canadian Football League, with an ankle injury cutting his season short.

Then, in 1960, Siesel’s professional football career came to an end with the Philadelphia Eagles with a career-ending knee injury.

Siesel is now retired and residing in Tallmadge.
Return to the 2004 Inductees