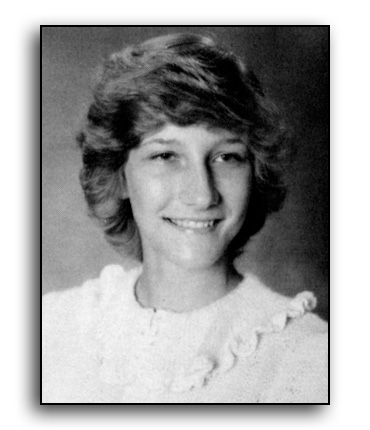 Wendy Vogel Lilly, a 1984 graduate of Bellevue High School, was a three-sport athlete for the Lady Red, earning two letters in volleyball, two in basketball, and three in track and field.  She was a member of the National Honor Society and received the Bellevue Gazette Award as the top female athlete at BHS in 1983.

Wendy was captain of her volleyball teams as a junior and senior and was First Team All-Northern Ohio League as a junior and team MVP, helping to lead the squad to a 19-3 overall record as NOL champs and District finalists. She led the squad that season with 65 aces and 83 kills.

She missed the first 16 volleyball games her senior year recovering from an injury but still managed to help the team repeat as NOL champs and District finalists with a 21-3 overall mark.  She also played in the Ohio Volleyball Coaches Association North-South All-Star game that season.

In basketball, Wendy was Second Team All-NOL as a junior. The team was 14-10 overall and was Sectional Champ and District finalist.  She led the team in scoring with a 10.8 average. During her senior season, Wendy was Second Team All-NOL in leading the team to a 23-3 overall record.  The squad was NOL champs, Sectional and District champs, and Regional finalist.  She had a career-high 23 points and 11 rebounds vs. Upper Sandusky and finished her career with 524 points.

As a junior, Wendy suffered a very serious broken femur during a race, excelling in the 100-meter dash (13.4), 200 (28.1) and long jump (15-7 ¾) in meets prior to the injury.  She came back to play all three sports her senior season but was still very limited by the broken leg.

Today, Wendy reside back in her hometown of Bellevue with her husband John.  They have one daughter, Hannah, who attends Ashland University.  Wendy works as a social worker for the Tiffin Developmental Center in Tiffin, Ohio.
Return to the 2015 Inductees