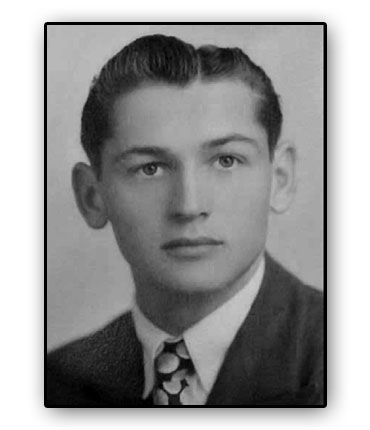 The first athlete in the history of the Northern Ohio League to be named first team All-Ohio in both football and basketball in the same season is just one of the many accomplishments to have graced the career and life of Bob Green.

Green earned three varsity letters in football for the Bellevue Redmen. He was named captain of the 1944 team that finished with a 7-1-1 overall mark. That squad won the Northern Ohio League and Little Big Four titles. Green was named first team All Ohio that season, the first ever Bellevue player to earn All-Ohio football honors. The versatile Green played offensive end and defensive halfback, was the team’s punter, and also kicked extra points. He was high scorer in 1944 with 11 touchdowns and five extra points.

It was his senior year that defined Green and his teammates, affectionately nicknamed “The Whiz Kids,” as the team took the Class A (big schools) state basketball title in 1945 with a perfect record of 25-0. Green was co-captain of the team, which was the smallest school in the big schools division that season. He was named first team All-Ohio and was also the top scorer in the state tournament.

In 1960, Green was named to the “Gail Townlee’s All Time, All Ohio State Tournament Team.”

He led the Redmen basketball squad in scoring the final three years in high school, hitting for 178 points as a sophomore, 232 as a junior, and 399 as a senior.

After high school, Green played four years of varsity basketball at Bowling Green State University (1946-50). He played in two National Invitational Tournaments at Madison Square Garden, and was a member of the BGSU team that finished third in the nation. He then played semi-pro basketball with the Dayton Air Gems of the National Industrial League in 1950-51.

Green also played one summer of professional baseball with the Cleveland Indians organization in Matoon, Ill. The following year he was transferred to Union City, Tenn., after being selected by Dayton, but Green decided to give up his baseball career and focus on his basketball career.

Green also served in the U.S. Marines from 1945-46 where he was a platoon leader and an expert rifleman. While serving in the Marines, Green played basketball on the Norfolk Naval Air Station squad, the only Marine on the team.

Green was a school psychologist for many years and is retired and living in Bellevue.
Return to the 2004 Inductees