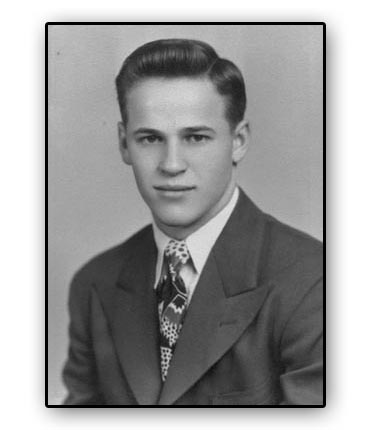 Not too many athletes ever get to experience the thrill of winning a state championship. Fewer still will be the one responsible for helping a team achieve that goal.

But Bellevue’s Eugene “Gene” Dudley is an exception to that rule, for it was his  set shot in the last four seconds of the game that propelled the Bellevue Redmen to the State Basketball Championship during the 1944-45 season. That group of “Whiz Kids” finished a perfect 25-0 and Dudley was named All-Ohio for his efforts.

Dudley would earn four varsity letters in basketball during his high school career. As a junior, he was captain of the team, and was co-captain of that championship team his senior season. In addition to being named All-Ohio as a senior, Dudley was also All-Northern Ohio League and made the All-State Tournament First Team.

Also as a senior, Dudley helped the Redmen football team to the Little Big Four and NOL championships with a 7-1-1 record. Ironically, he did not even start at quarterback until the third game of the season. He was named third team All-Ohio after that 1944 season.

Dudley was also active in school activities, including Student Council, intramurals (he was lightweight boxing champion as a junior), Senior Athletic Scholarship Society, National Honor Society, and was involved with the senior class play.

From 1946-47, Gene played quarterback, basketball, and baseball for the 9th Infantry Regiment for the U.S. Army. He then returned to Bowling Green State University in 1947 where he lettered in basketball and was invited to the New York NIT Tournament. The following year he again lettered in hoops at BGSU and again played at Madison Square Garden in the NIT. He lettered one more time during the 1949-50 season when he set the BGSU record for most games played.

From 1950-52, Gene played semi-pro basketball with the Dayton Air Gems. In 1952-53, he was player/coach of the Frigidaire Division of General Motors team that won the city championship. He also served on the Dayton Junior Chamber of Commerce Board and was invited and served on the Board of the City of Dayton Athletic Recreation Department. He also played and was captain for a Junior High YMCA basketball squad.

Gene married the former Maryellen Koch in 1947 and they raised four children, Thais, Doug, Laurie and Julia. Gene was employed by General Motors Frigidaire in Dayton from 1950-58, and was general manager and then owner of the manufacturing plant during the time frame of 1958-81.

Gene retired in 1981 and now resides in Sarasota, Florida.﻿
Return to the 2005 Inductees