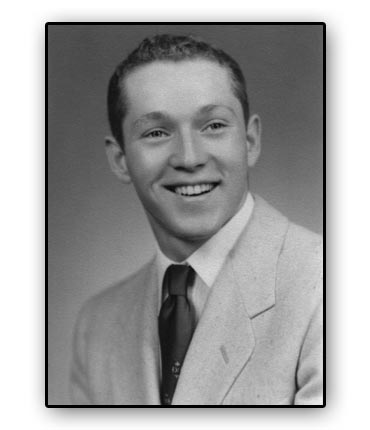 ﻿
A 1954 graduate of Bellevue Senior High School, Robert “Bob” Hart was a standout in both football and track and field, earning four varsity letters in each of the two sports.

Bob earned honorable mention All-Ohio in football in 1953 and was considered one of the truly great running backs in Redmen history. During one Northern Ohio League game at Galion, Bob ran a kick back 80 yards for a touchdown, only to see the play wiped out by a clipping penalty on the Redmen. After backing up 10 yards for the penalty and receiving the new kick, Bob proceeded to run this one back 90 yards for the score – with no penalty flags on the play!

He also qualified to the state track and field meet in both the 220-yard dash and long jump events. In 1953, he set the Northern Ohio League long jump record at 20-feet, 5 ½-inches, a mark that stood until 1957.

Bob received a football scholarship to Syracuse University and was the leading scorer on the freshmen squad. He left Syracuse in 1955 but returned in 1958 to finish his collegiate career, playing in the Orange Bowl in 1958 and the Cotton Bowl in 1959. That 1959 squad finished as National Champions with an 11-0 record. While at the ‘Cuse, Hart earned three varsity letters. While at Syracuse, he had the honor of playing with future NFL stars such as Jim Brown and Ernie Davis.

His first teaching assignment after college was at Pennsylvania Lancaster Catholic, where he served as backfield coach and head track coach from 1961-64. In 1964, his track squad placed third in the State Catholic Track Meet.

Bob’s first head coaching assignment was from 1964-67 at Sandusky St. Mary’s Central Catholic High School, where he compiled an overall mark of 25-3-2. His 1966 team went 10-0 and finished the year third in the state polls. He was honored by being selected the 1966 Northwest Ohio Coach of the Year, Class A (small schools).

From 1967-71, Bob was a teacher and head coach at Toledo Waite High School, and eventually became as assistant coach under Lowell Shaffer at Bellevue Senior High School in 1971.

In 1972, Hart moved over to Norwalk High School as head football coach, a position he held from 1972-80. His nine-year overall record was 51-40-1, with his squad earning Northern Ohio League titles in 1974 and 1976. The 1974 squad won the State Class AA Championship, earning Bob Class AA Coach of the Year status in both Ohio and the Northwest District. He was selected to coach the Ohio North-South All-Star football game and to also coach the Big 33 game against Pennsylvania in 1975.

Bob married the late Mary Lou Stratso of Bellevue in 1956 and together they raised three wonderful children, Robert Jr. of Cuyahoga Falls; Sandra Hester of Woodbridge, VA; and James of Hampton, VA.

Bob continues to reside in Norwalk, Ohio.﻿
Return to the 2005 Inductees