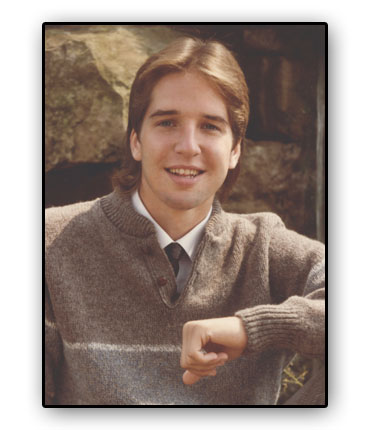 ﻿
Martin F. “Marty” Goetze was always on the run during his Bellevue Senior High School athletic career, and he would not have wanted it any other way.

An accomplished runner, Marty earned seven varsity letters in the sports of cross country and track and field. The 1985 graduate of BSHS led his cross country team to the State Title, Class AA, in 1984.

His stellar running career began as a freshman in 1981 when Marty made All-Northern Ohio League first team and was Bellevue’s No. 1 runner at the Findlay Regional that same season. During his freshman year of track and field, Marty was All-NOL in the 1600-meter run and was also a regional qualifier in the same event.

As a sophomore, Marty was once again first team All-NOL in cross country, was named All-Ohio in cross country, was the No. 1 runner on the NOL championship team, and was the No. 1 runner at state, leading the Redmen to an eighth place overall finish. During track season, he was once again All-NOL in the 1600-meter run and was a regional qualifier as part of the 4x800-meter relay team

Marty’s success continued as a junior, when he was All-NOL first team once again in cross country, finishing first overall at the league meet. For the second straight season he also earned All-Ohio status, was Bellevue’s No. 1 runner on the NOL championship team, was the No. 1 runner at state, leading his team to a fourth place finish overall, and was Bellevue’s No. 1 runner in 10 straight dual meets, four invitationals, district, and regional. In track and field as a junior, Goetze was All-NOL in two events, was NOL champion in the 3200-meter run, qualified to regionals in the 1600 and 3200, and set the current school record in the 1600 at 4:23.4.

Finally, as a senior, Marty led the Redmen to the Class AA state title. He was the top runner at state for the team, placing third overall, and was also named All-NOL first team for the fourth consecutive year.

After high school, Marty participated in varsity cross country and track at the University of Florida.

He currently resides in Los Angeles, California.﻿
Return to the 2006 Inductees