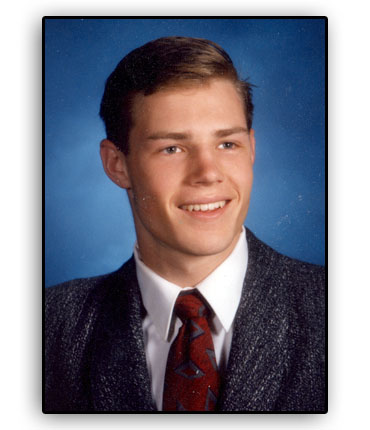 ﻿
In a productive and meaningful life cut short by a fatal accident, Carl Keske left his mark on his alma mater and all those who came in contact with this one-of-a-kind person.

Carl graduated from Bellevue Senior High School in 1993 after earning eight letters in the sports of wrestling, football, and track and field. Eight years later, BSHS would lose one of its beloved alumni in a tragic accident.

But Carl’s legacy lives on through his family, his friends, and his accomplishments, most of which were in the sport he loved best, wrestling.

Carl lettered in wrestling all four years of high school, adding three letters in football and one more in track and field. At the time of his graduation, Carl ranked first on the all-time Redmen wrestling career win list at 100-22. He was 35-2 as a senior and was a participant in the 1992 Sandusky Bay Freestyle Tour.

Carl was also involved in many groups and organizations while at BSHS, including French Club, Quiz Bowl, Chess Club, Bridge Club, Key Club, Student Council, was elected to the National Honor Society, and was the Student Council President during his senior year.

After high school, Carl enrolled at Cornell University in Ithaca, NY, where he compiled an 87-22 overall record, going 33-2 as a senior. He was fifth on Cornell’s all-time win list at the time of his college graduation and was a member of the 1995 Ivy League champion wrestling team. He earned three varsity letters at Cornell, was named first team All-Ivy League three times, and was twice an Academic All-Ivy League wrestler.

Carl was two-time Eastern Intercollegiate Wrestling Association Tournament champion and was named the outstanding wrestler in 1996, one of six Cornell wrestlers to ever achieve that honor. Twice he was named the Peter J. Floros Memorial (MVP) Outstanding Wrestler at Cornell, was a two-time NCAA Division I tournament qualifier, and was All-America in 1997, finishing seventh in the nation.

Carl rose to the rank of Captain in the U.S. Army and served his country during the war in Kosovo. He was accepted into the George W. Bush School of Government at Texas Tech at the time of his death.

Carl’s parents, Loren and Jane, reside in Van Wert.﻿
Return to the 2007 Inductees