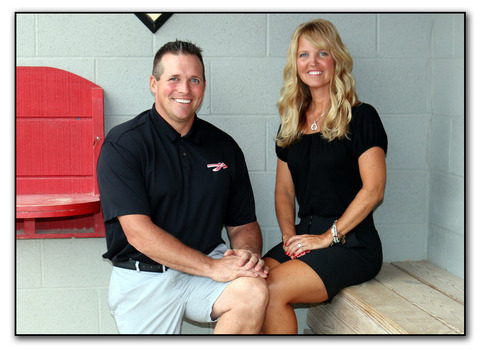 This year the Hall of Fame Committee is proud to announce and recognize Todd & Amy DeWitt as the 2016 “Big Red” Service Award Recipients.  Todd & Amy are both Bellevue High School Graduates.  Todd graduated in 1989 and Amy in 1990.  They raised their two children Morgan and Dylan in their hometown of Bellevue, Ohio.  They have been very active assisting their community throughout the years.  As Morgan and Dylan entered Bellevue High School, they became very active in the Redmen Athletic Booster Club, supporting all student athletes in a variety of ways.  Here are just some of the highlights on how both Todd & Amy have donated their time & efforts in support of the Redmen.
Todd & Amy have been very busy behind the scenes and out in front of some of these big projects.  They have earned this special honor and recognition as they have served the kids, coaches, and community with a lot of effort and pride.

Todd and his wife Amy continue to live in Bellevue.  Todd is employed at Amcor Rigid Plastic as a Production Supervisor.  He is also self-employed with his nine year business Supreme Restoration.  Amy is employed by The Bellevue Hospital as a Medical Coder.  Their daughter Morgan is a Findlay University Graduate, and will be pursuing her Masters Degree this fall as a Physician Assistant.  Their son Dylan is currently a sophomore at Findlay University, where he is a member of the Oiler Golf Team.