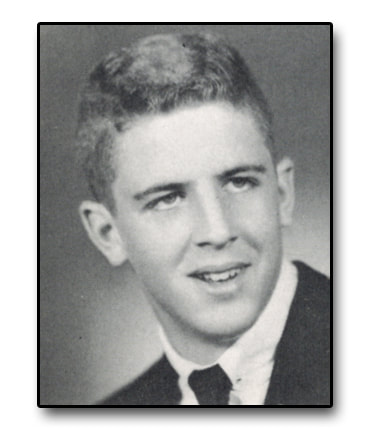 A 1959 graduate of Bellevue High School, Eric Johnson will be posthumously inducted into the Hall of Fame after passing away in 1995. While at Bellevue High School, Johnson earned eight varsity letters during his playing days for the Redmen, two letters each in football and basketball and four in track and field.

Johnson lettered as a junior in football in 1957 and as a senior the following year; he also scored 50 points as a halfback, was First Team all-Northern Ohio League (NOL), and was the team’s Most Valuable Back. The team went 5-4 overall his senior season.

In basketball, Eric scored 306 points during his senior season, second only to fellow Hall of Fame member Jere Crosby’s 313 points. Eric was First Team All-NOL and the team’s MVP in 1958-59. The team was 11-8 overall that season and 5-2 in the NOL.

After wrapping up his senior year in track and field and earning his final letter, Johnson was named the Gazette Award Winner in 1959 as the school’s most valuable male athlete.

After graduating high school, Eric attended The Citadel Military College in South Carolina on a football scholarship. He played four years as running back/defensive back and played in the Tangerine Bowl in 1960. He had offers of pro football tryouts from the Chicago Bears and Green Bay Packers but immediately enlisted in the United States Air Force.

In 1964, he married Port Clinton native Josephine Podgurski and they were together for 31 years. They had two children, Jeff and Kris.

In the Air Force, he was commissioned as Second Lieutenant, entered the pilot training program and was deployed to Vietnam in 1967. He eventually attaining the rank of Captain. He was Honorably Discharged in 1968.

Returning back to Ohio after his military days, Eric and Josephine settled in Mansfield, Ohio, where Eric was a salesman throughout the Midwest for Columbia Cement Company and Essroc Corporation. He was also very active in the Mansfield sports community where he coached youth football, basketball and baseball for many years. He was also a track and field official and trustee for the Mansfield Mehock Relays. He was also elected to the Mansfield City School Board and later became president.